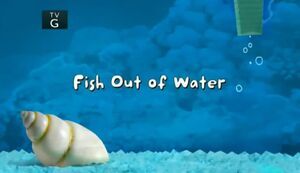 When Milo, wearing his special "Water Suit," ventures outside the tank alone, Bea and Oscar must risk everything to save him, and all three end up stranded in the pet store to face the wrath of Wilford, the store cat. Now, Milo has to put his selfishness aside to save his friends.

Bea thinking of after getting the part in the audition.

But Oscar quickly snatches it back, ripping it up.

Milo tries to explain why he was late to Me. Baldwin.

Mr. Baldwin says he is pregnant.

The class gasps except for Clamantha who laughs.

Mr. Baldwin calls Milo a selfish fish.
Add a photo to this gallery

Going Outside the Tank

Milo asks Bea if he is selfish and blinks.

Milo showing an advertisement for Watersuits.

Milo wants to leave the tank.

Milo's head in a fish tank.

Oscar wants to hold hands because of safety reasons.

Oscar lands on his face.

Oscar sees the pet store as a video game.

Milo wants his friends to go on the adventure.
Add a photo to this gallery

In front of Bud's office.

Pictures of some adventures.

Friends!
Add a photo to this gallery

The Cat in front of the fish.

Oscar trying to explain his feelings for Bea.

Using The Cat to get to the tank.
Add a photo to this gallery

The theater auditions are held.

Mr. Mussels helping Albert Glass saying he can get on Fish Broadway someday.

His voice scares Albert and swims away crying.

"You guys are the best friends a girl can ever have"

"No, you guys are the best friends a girl can ever have"

Bud looking at Wilford.
Add a photo to this gallery

Mouse and Snake.jpg
A snake and mouse that like to watch the tank life.

A tarantula playing the guitar.
Add a photo to this gallery

To return to the "Fish Out of Water" episode summary, click here.

Retrieved from "https://fishhooks.fandom.com/wiki/Fish_Out_of_Water/Gallery?oldid=13604"
Community content is available under CC-BY-SA unless otherwise noted.