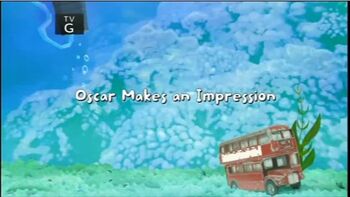 Oscar's impression of the Queen of Fish England is so similar that even Mr. Mussel's, who is a big admirer of the Queen, cannot tell the difference. The gang goes along with the ruse, until Oscar is mistaken for the Queen by a bridal party and swept away to "his" royal wedding. The day then escalates into a "Slow Jams Rap Battle" between Milo and Mr. Mussels to win the hand of the fair Oscar.

Bea tells Oscar to make his Impression of the Queen

He takes Oscar, Milo and Bea to London

Oscar, Bea and Milo after a great day

Oscar doesen't wanna be the Queen anymore and leaves

"Married? I can't get married!"

The man who should marry "Oscar"

But Mr. Mussels wants to marry "the Queen"

So they fight against each other in a battle

Milo and Oscar run out, crying. "We are so sorry!"

But it is just Bea and a wax sculpture

Add a photo to this gallery
Retrieved from "https://fishhooks.fandom.com/wiki/Oscar_Makes_an_Impression/Gallery?oldid=21170"
Community content is available under CC-BY-SA unless otherwise noted.