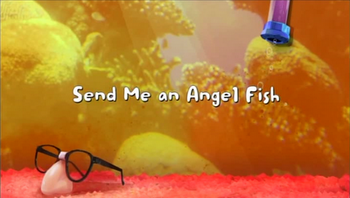 There is a new student in Freshwater, her name is "Angela" and she is the head of the rival debate team, whom Oscar finds himself hanging out with with and falling for... until he begins to suspect she might just be spying on him to gain the upper hand in the upcoming debate on the pros and cons of video games.

Practicing for the debate

Oscar's got a gamer's eye!

He's also got a joystick thumb!

Angela faints at talking with Oscar

Sad to not be in love with Bea 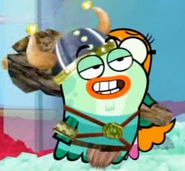 Falling from a tank!

Row, row, row your log, gently down the stream!

Dancing at a resturant? (Notice the Fish England queen in the background)

Kissing of an unpopular couple makes the fans cry

A new school on Fish Hooks

The principal announces the start

Happy "to win the debation".

Angela really is in love

But Randy Pincherson still is a theif

This is 100% approved by Bea Goldfishberg, Actress Superstar!

"Tonight, we dine on apple pie!"
Add a photo to this gallery

To return to the "Send Me an Angel Fish" episode summary, click here.

Retrieved from "https://fishhooks.fandom.com/wiki/Send_Me_an_Angel_Fish/Gallery?oldid=20934"
Community content is available under CC-BY-SA unless otherwise noted.